Home » Uncategorized » 20150918 The Hidden Agenda of the Political Mind

People’s political views and differences are not result of their psychological predisposition, but rather expression of their deep interests created by their belonging to specific racial, social, and economic groups within society, their religious and philosophical background, and their lifestyles. With all these circumstances being not easily changeable, the chance of reconciliation on many of current political differences are very small so the struggle will continue as long as there is no significant changes in underlying parameters for enough people on one side of the disputes acquire overwhelming majority and to be able settling issues the way they want.

This chapter starts with review of 2012 election and Romney’s evaluation of his defeat as result of Obama’s ability to give out government goodies to supporters in form of welfare and other programs. From there it goes to confirmation with statistical data that self-interest does play a big role in voters behavior, only analysts often miss complexity of this self-interest. Authors provide an interesting name for this: Direct Explanation Renaming Syndrome (DERP), which means circular explanation of behavior based on answers to questions describing this behavior.. For example people who respond that they prefer to be with other people assigned label of extraverts with following explanation of their behavior directed to meet others explained by them being extraverts. The DERP syndrome if widely used in explanations of political behavior. Authors define their objective as to find explanations to political behavior in real interests of individuals and avoid labeling that leads to DERP.

This is about what it means to advance individual’s interest and how much more complicated it is in reality than in academic and analytical writings where interest defaulted to narrow economic gain. At the beginning of the chapter authors review 5 claims that seemingly deny self-interest as an engine of political attitudes and action. They find that only one is actually true, 3 clearly false and one unclear. After that authors discuss nature of self-interest and find that it is extremely complex and very difficult to identify. Consequently they suggest substituting “interest” with “fitness” – something that advances person in his/her family everyday goals. Finally author point out that humans are social animals and live is a team sport environment so individual interest is highly correlated with advancement of group that individual belongs to and, since individual belongs to multiple groups sometimes with conflicting interests, the final combined vector of political action could be quite difficult to reconcile with separate components.

This chapter starts with analysis of how mind works based on the latest achievement of neuroscience leading to conclusion that our conscious understanding of our own actions is often incorrect and is similar to works of public relations department, which main activity is not decision making, but rather decision justification for ourselves and external world. In reality our mind always directs our political positions and actions to be consistent with our self-interest. As example author reviews abortion issue trying to demonstrate that anti-abortion forces are driven not by purely religious or humanitarian motivation, but rather by self-interest of Ring-bearers, people who want to protect their monogamous way of live from supporters of free love by increasing cost of free love lifestyle. Correspondingly pro-abortion forces are not really that much care about women right to choose as about decreasing cost of free love lifestyle.

In this chapter issue under review is abortion and sides that support it and/or fight it directly linked to Freewheelers who are trying to protect their lifestyle and Ring-Bearers who are trying protecting their families from sexual predators. Authors extensively use these two morally incompatible groups and here is their definition: 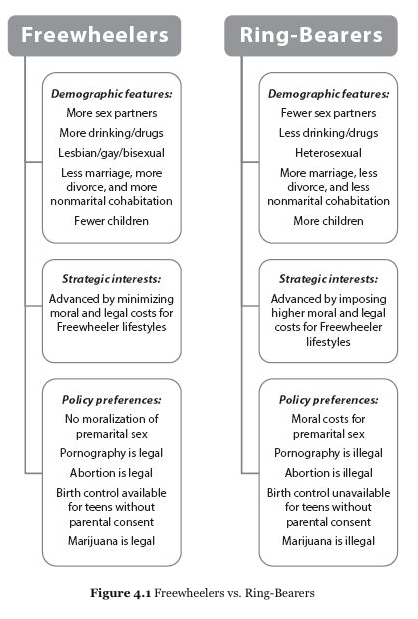 Chapter 5: Rules of the Game: Group Identifies and Human Capital

This chapter is about another set of hot issues: group identities and related discrimination and affirmative actions that authors being liberal could not possibly recognize as being the same thing. However the bottom line here is that they link it to human capital with logic of interest working in such way: individuals with low level of human capital support group based discrimination if their group have advantage because it improves their chances, while individual with high level of human capital prefer equality because their human capital supports their chances of winning in fair competition. Being complex creatures people could have different interest in different areas so they could support discrimination in one are and fight for equality in another without feeling the slightest remorse from contradiction.

This chapter reviews economic interests of different groups and political positions derived from these interests. Here is a nice summary they provide:

Chapter 7: The Many Shades of Red and Blue

This chapter is about what makes people democrats or republicans and it is based on review of Harvard class of 1977. These are all rich and prosperous people and authors seem to find it paradoxical that they are 6 to 1 Democrats. Authors’ explanation is that these people are high human capital individuals and such people are inclined to be Democrats. Here result of their analysis as to predictive parameters to be a democrat:

Another set of predictive parameters is income and church attendance:

Here authors review republican coalition that they believe consist of partial inclusion from these groups:

This final chapter summarizes authors main thesis that political views are derived from direct interests of individuals whether they are consciously recognized or not and therefore generally these views are quite predictable based on economic position, human capital possession, and lifestyle of individual. The main inference from this analysis is that first and foremost that we cannot “all get along” and reconcile our difference because they based on deeply seated and not easily modifiable substance of our lives.

I completely agree with idea that we all have political view based on our position in society and lifestyle. I also agree that we all driven by self-interest disguised as noble reasons by our self-deception. The only issue I have with this analysis is authors’ position on human capital as direct function of education. I see human capital as much more complicated parameter related not that much to educational credentials, but rather to individual ability to successfully sell intellectual services. This approach would allow understand that seemingly paradoxical situation when very rich graduates of Harvard 77 are overwhelmingly democrats is no paradox at all because ability of these individuals to sell their services as highly paid lawyers, corporate and government officials, and such is highly dependent on government intervention, with democrats as party of big government clearly protecting well being of these people by expanding government. Even doctors and educators who are seemingly provide direct services to people are highly dependent on government intervention to force healthy people without children in school to pay high taxes so these professionals could charge exorbitant prices for their services. Without government intervention these services would be priced by market pretty much within financial abilities of people who actually require such services and these people would be inclined to drive hard in search of bargains. With government intervention force is used to confiscate money through tax and bureaucrats who allocate loot for acquisition of these services also benefit from high prices because it increases their share.

Similarly paradoxical issue with Kansas when low income working people prefer republicans would be better explained not by religious believes of these groups, but rather by their much higher ability to obtain wealth via selling their non-credentialed services and produced goods on free market without government intervention than on market limited by government intervention with its licensing, reporting, and compliance requirements they find very difficult to satisfy.