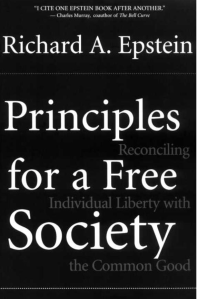 This is a very interesting attempt to review contemporary legal environment with its history of moving into direction of increasing state power and government intervention in all areas of life. However the main idea is not just to document it, but rather find some way to reconcile it with Laissez-Faire ideas that author believes are the best for economy and prosperity. Author seems to believe that these free market ideas in their simplistic form could not support effective functioning of society in contemporary complex environment, so the state power had to be used in multitude of situations to overcome these limitations, and he reviews such situations in this book.

This is foundational part of the book with discussion of Laissez-Faire as concept often misunderstood as free for all with glorification of individual at the expense of society, instead of the best way to organize economy in common interest, which it actually is.

1.Natural Law: The Utilitarian Connection: Permanence and Change; Benevolence of Strangers; Sharing within the Family; Individual Autonomy; First Possession; Custom as a Source of Law

This chapter reviews two approaches to legitimacy of society organization: natural law approach which states that people have inherent unalienable rights and utilitarian approach which states that people should organized society in such way as to provide maximum benefits to maximum numbers. Generally author critic natural rights approach as foundation of Laissez-Faire and suggests that much better foundation could be build on notion of private property as more effective way to incentivize individuals to produce and cooperate for common benefit, than any other method.

This chapter analyzes interaction between laws and social norms that provide a very sound base for human interaction either at market place or in other areas of human live. Author also provides critic of contemporary trend of increasing government power and influence by pushing legal norms into areas that traditionally were domain of social norms.

Here author analyses notion of harm and its application in contemporary world. The most salient is discussion about difference between harm by aggression and harm by competition. While both types could cause pain and suffering for individuals, only the former causes negative consequences for society by causing interactions being a negative sum game, while the latter is actually beneficial because absent fraud and aggression competition is the only way to discover the best way to do things and move society overall in this direction. However despite generally supporting idea of unabridged competition sans aggression, author nevertheless supports idea of limited antitrust laws that restrict competition under some very specific circumstances.

This chapter looks at benefits that people did not ask for, but forced to be paid for. This is logical foundation of theories of social contract. This idea has very limited use in common law, but widely used by statists to justify their use of coercion to extract resources from productive people.

5.Altruism: Its Uses and Limits: Altruism and Self-interest; The Modest Uses of Selective Altruism; Altruism and Communitarianism; The Pretense of Altruism;

This is discussion of altruism and more important use of altruism as cudgel against Laissez-Faire despite the simple fact that it does not require or even promote greed and material self-interest. All it requires is to remove government force from resources production and allocation, leaving it to voluntary decisions of people. The typical result of government forced altruism is resource transfer from poor to rich under banner of help to the poor.

This is kind of continuation of discussion of forced altruism, but it is conducted in terms of negative and positive rights, with negative rights being right to property, contract enforcement, and other legal tools to allow people to keep resources they produced. The positive rights that represent form of forced altruism that created basis for welfare state is basically rights to product of labor of other people. In addition to this the contemporary legal system often supports idea of individual’s right to be protected from own errors, mistakes, and even plain self-destructive behavior. However it creates huge complexity because protection of one person at the expense of another would cause push back from the loser, resulting in attempt to find some equilibrium that would take into account balance of power between constituencies.

This chapter explores connection between rights created by legal system and remedies used to enforce these rights with conclusion that absolute conceptions of private property are valid in main, but with exception of special cases of necessity when property rights could be forcibly substituted with compensation rights.

This chapter is about common property such as air and water and impossibility of dividing it into private domains.

This final chapter continues discussion of commons concentrating on their specific incarnation in what commonly is considered monopolistic arrangements such as railroads, radio spectrums, utilities and similar enterprises when competition believed to be next to impossible. Author believes that it warranties government interference to enforce general availability of service for everybody at affordable rates.

EPILOGUE A Return to Fundamentals

The final discussion is about necessity to adjust Laissez Faire ideas to contemporary complex society and economy when limiting state intervention is not enough and the used of state force could be justified for multitude of situations discussed in previous chapters of this book. The bottom line is necessity to find proper legal framework for state power to be “strong enough to hold us together, but not so strong as to reap us apart.

It is a very interesting approach and I found in this book quite a few examples of issues for which Laissez- Faire solution seems to be impossible or at least extremely difficult. Nevertheless none of discussed situations warranties, in my opinion, need for state power beyond prevention and/or retaliation for aggressive use of force or deception. I think that reason for my disagreement comes from different approach. Author seems to be looking at every situation from point of view of legal scholar that he is, meaning that he is looking to develop legal algorithm for solution that would fit any conceivable situation and could be enforced by external state power. I, on other hand, believe that many of these situations are so complex that such solution could not possibly exists, so all issues should be resolved between participants any way they want to on condition of non-use of aggressive force and deception. The caveat here is that I believe that equality and marketability of rights for resources and equality of borders between individuals would support such resolution if supported by availability of truthful information about issues and hand and past history of participants.