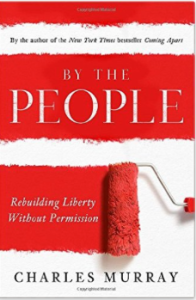 The main idea is that USA deviated from constitution and expanded government to such extent that it is impossible to come back to the rule of law and constitutional republic as founders designed it. However not everything is lost because the huge bureaucratic machinery that rules USA, practically by decrees, is highly inefficient, overcomplicated, and has a zillion of contradictory rules and directions. It opens this system to effective push back from organized civil disobedience that potentially could start dismounting bureaucracy and initiate slow movement back to constitutional republic. It could be done within law by actively resisting the most egregious violations with legal and financial support of non-governmental organizations and funds created specifically for these purposes.

PART I: COMING TO TERMS WITH WHERE WE STAND

This is a brief history of destruction of American Constitution that was slowly occurring since the beginning of the Republic, but really took off in the era of New Deal when legal revolution of Roosevelt administration successfully attacked what still remained of state rights and practically removed any restrictions on government spending and regulations. Author believes that this revolution is not reversible because too many people now depend on government for resources for everything from social security to protection of environment, therefore no political party would be able to obtain support of majority if it tries to stop these resource flows.

Here the point is made that despite incessant declaration of adherence to the rule of law by all politicians, in reality we live in practically lawless society because laws and regulations are too complex and contradictory for anybody to know and understand, process is too slow and expensive for people of reasonable means to be able to contest any violations by bureaucracy. It is also consequence of moral bankruptcy of legal profession when lawyers abandoned self-restrain causing explosion of litigation.

Chapter 3: An Extralegal State Within the State

This chapter is about political corruption that made it all but impossible serious reform of regulatory state and history of maturation of corruption in USA. This corruption is directly connected to amount of resources acquired by the state from productive part of population, which politicians have opportunity to distribute to their clientele. Since this clientele includes both rich and poor, providing money and votes, to make change is practically impossible. The deal is simple: rich get protection from competition and government contracts in exchange for financial support of politicians’ ambitions while in office and making them wealthy through lobbying and/or consulting after leaving office. The deal with poor is also not complicated: they vote for those who support more of welfare for them.

Here author reviews in details why it is not possible to limit federal power via normal political process. The reason is well-established dynamics of collective action in advanced democracies when special interests include practically everybody making it impossible to remove redistribution and limiting political competition to competition between allied groups of special interests.

Chapter 6: On the Choice of Civil Disobedience

First author make case for legitimacy lost based on traditional American understanding of government legitimacy as voluntary agreement of governed. The federal government lost its legitimacy in theory during legal revolution of 1937-1942 and lost it in practice in 1960s. He estimate that only 10-20% of Americans would agree with this opinion, but he points out that the level of trust in government doing right thing fallen to even lower level. In practice Americans had 3 compacts that provided legitimacy for government:

Government violated all three in 1960s. Author provides details for these violations and states that it eliminated legitimacy of federal government.

Here author defines rules for civil disobedience: which laws and regulation should be and which should not be subject to disobedience. He also details how exactly such disobedience could be conducted. The main objective is to move to practical implementation of rule: “No Harm, No Foul”, by ignoring laws and regulations that have no relation to preventing harm to the people.

This is analysis of federal government enforcement capacity based on numbers of attorneys, administrative judges, and other personal. Author believes that since these numbers are small the probability of ordinary Americans to be persecuted for disobedience is small and could be compensated by creating safety and support net in form of “Madison” funds to pay fines and compensate losses from government actions.

In this chapter author reviews approach to government as insurable hazard and analyses one specific case of potential disobedience: inspection of dental offices. He believes that it would be possible to repulse government counterattack via expanded litigation and support of public opinion.

Chapter 10: From Systematic Civil Disobedience to a “No Harm, No Foul” Regulatory Regime

This is analysis of another potential movement to “No Harm, No Foul” regime based on assumption that it is possible to get courts to change approach to “Arbitrary and Capricious” clause of typical regulations. He even presents some evidence that such strategy could work.

Here author reviews a conceivable scenario when failed regulatory state could lead courts to move back towards written constitution ignoring, if necessary, stare decisis based on 80 years of leftist big government supporting cases. He even provides a hypothetical scenario for such situation.

Chapter 12: The Return of Diversified America

This is a very interesting brief review of the history of ideological diversity in America. Below is table representing ideologies and attitudes of 4 founding groups of America: 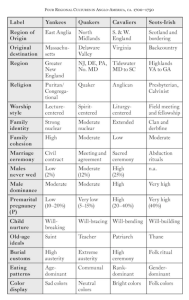 It did not have less diversity afterward with Germans, Irish, Jews, and many others landing in this country. Actually mid XX century period if highly uncharacteristic, relatively short, and practically ended by now, bringing wide diversity and consequently instability. The original constitution was so effective because it provided framework for mainly peaceful coexistence of these diverse groups that regulatory redistributionist state could not provide. The return to original rules of game and dismantling of such state could be one and only way to avoid not necessarily peaceful fight for spoils of redistribution.

Chapter 13: The Best of Times

Author believes that we live in the best time when it becoming possible to move on to expansion of liberty as it was understood in original American republic and in this chapter he reviews various factor that support this believe:

Chapter 14: Once the Curtain Has Been Pulled Aside

Here author presents a number of logical inferences for where we should be economically and politically at current and projected future level of technological achievements if we can limit or, even better, eliminate deleterious result of activities of “Government of the Factions, by the Factions, and for the Factions.” He is optimistic that growing diversity of America will make it to overcome current government logjam and that America, as we know it, will remain the land of the free.

I fully agree with author’s analysis of deadly threat for America’s soul created by dramatic expansion of big government into all areas of live pushing away free markets and personal freedom of the people. However I do not think that such remedy, as civil disobedience would work to push government back. People who control government: Bureaucrats and Politicians are pretty smart and highly capable to develop counter measures limiting or even just plainly outlawing Madison Funds, making it illegal for one person or organization to pay fine for another person, or even criminalizing disobedience. I think that development will go its usual way: revolution of groups of individuals who feel dispossessed and exploited by current regime against people who mainly benefit from this. We currently at the point in our development when majority of people who are hurt by regime believe that they benefit from it. This includes recipients of government handouts whether in form of welfare, low level bureaucratic government jobs, or government contracts. For time being real beneficiaries of the regime: high-level bureaucrats and government-connected plutocrats would be able to continue its offensive against America. The forces resisting them: free market plutocrats and productive individuals are getting progressively weaker for now because they are undermined by cheap foreign competition, automation of labor, and government intervention. However it will stop and pretty soon when government bureaucracy will keep increasingly proving in more and more areas that it is not capable to meet needs and wishes of individuals, turning even those who lives off government handouts against government. It would happen a lot sooner if these people would have other source of resources than sales or labor or government handouts.