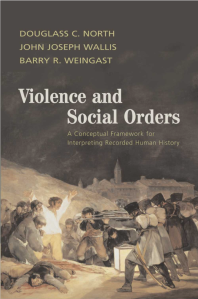 The main idea of this book is that the typical approach to understanding history and development of the state and society is insufficient for explanation of many known facts and developments and the new framework for analysis in social sciences is required if we want to understand them. Author provides such framework with Idea of qualitative difference between two types of societies: Natural Order of Limited Access typical for the vast majority of societies when it is controlled by violence of dominant group of elite and Open Access Order when society is not directly controlled by any group, but rather is continuously in process of compromises and accommodations between multiple groups not only elite, but practically of everybody with access to information and organization open for all.

This book is built on the concept of social order of organization of human society. The original way of organization existed in hunter-gatherer societies. Author calls it foraging order and does not allocate lots of attention to it because it is pretty much gone. The concern of this book is with two contemporary social orders. One is society organization that author calls Natural State or limited access order. It was created as consequence of agrarian revolution about 10,000 years ago. This order based mainly on personal relationships and individual has or does not have access to power and resources based on his/her belonging to various groups divided by family connections, religion, locality, and such. The third order author identifies is the open access order created as consequence of industrial revolution. In this order personal relationship while still matter, nevertheless lose paramount significance opening way for impersonal interactions based only on mutual benefits derived from these interactions. Instead of individual whose value defined by belonging in limited access societies we have individual whose value defined by this individual qualities and abilities with little if any regard to background. Author also provides evidence of correlation between type of social organization and material prosperity of society with more open access society significantly richer than limited access societies. Interestingly enough the difference could be traced not to higher economic growth of open access societies overall, but to their ability to retain achieved economic levels even in bad times. Author provides initial overview of logic for Natural Order, Open Access Order, and Transition from one to another.

This chapter is an analysis of Natural state, which is the state with preponderance of limited access order. The key feature of such state is that it is always based on violent dominant coalition that limits access to resources to everybody. All Natural orders of limited access have typical characteristics: they limit access to organizational forms and trying to control trade in order to support rent extraction for members of dominant coalition. Author also defines three types of natural states: fragile, basic, and mature. Fragile are natural states in which dominant coalition does not possess overwhelming power to suppress all competition leading to ongoing violent struggle. Majority of all states start in this way when close by tribes coalesce into one entity. The basic natural states have stable and durable organizational structure with well-defined elites and rules of succession. The rule of the dominant coalition generally accepted by population as legitimate. The mature state is farther extension of basic state when dominant coalition allows creation of elite organizations outside of state. It typically creates codified laws and organizations to support it with increasingly wide share of population acquiring status of legal entity and capability to use laws for their benefit. Author reviews history of Carolinians, Aztecs, Rome, France, and England to illustrate his model including transformational development from fragile to basic to mature Natural state.

In chapter author applies concept of Natural state to England in more details reviewing English Land Law, development of court system, and Impersonalization of property with progress of feudalism. This chapter also contains a very interesting statistical data on class structure and income distribution of England as a mature state of Natural order in 1692. 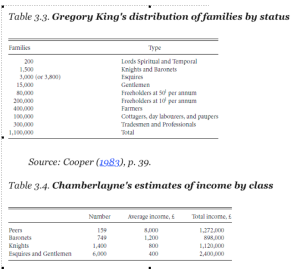 This chapter is detailed discussion of Open Orders, which is kind of description of contemporary developed Western societies. Its main characteristics defined as having open access for individuals to organizations, impersonal control over violence, protected property rights and generally preponderance of rule of law, competitive elections leading to restriction on rent seeking by political means, and, finally, relative autonomy of market economy. One interesting and non-trivial part of this discussion is author’s understanding of role of creative destruction in prevention of monopolies, something that usually missed, substituted by unwarranted believe that government prevents and controls monopolies by regulation. There is a very interesting point made about Open Access framework that it explains why relatively free market continue survive in developed western countries despite proliferation and power of bureaucracies and rent seeking special interests. This point is that Open Access to organization allows creation of wide variety of conflicting special interest groups that happily expose and undermine each other’s rent opportunities leading to continuing political equilibrium, restricting overall rent extraction in society, and leaving space for free market. Another difference of Open Access framework from general approach is that it does not consider Democracy as conduit for income redistribution. It is considered more as the tool to create complimentary to market sources of goods and services that some groups of population have difficulty obtaining from market system such as social insurance, infrastructure, and such. In short author believes that this complementarity substitute of market with limited government changes the zero sum game of redistribution into positive sum game of public goods generation.

This chapter is about when and how transition from Natural to Open access orders occur with special attention to doorstep conditions for such transition:

Step 1: Establishment of Rule of Law for Elites

Step 2: Establishment of Permanently lived Organization in the Public and Private Spheres with continuously widening access to such organizations for everybody

Step 3: Consolidated Control over Military that prevents any possibility of armed clashes for dominance between various groups of elite.

All these conditions are intertwined and build on one another.

This chapter is review of actual process of transition as it occurred historically in the most advanced countries of Open Access Order: Britain, United States, and France.

The final chapter is about suggestions for use of the new framework of Natural Order developing into Open Access Order for research agenda in Social Sciences. This includes concentration of research on use of violence, lifecycle of Institutions, Organizations, and Believes that drive human actions.

I found the new concept of access orders (Limited versus Open) very interesting and well thought through. I think application of this framework to historical research would be very enlightening and its application to current situation especially in relation to developing world could lead to a very practical recommendation in regard to how to use both aid money and violent intervention in order to achieve real progress in their situation. These requirements become imperative if we want to stop civil and religious wars, economic and other man-made disasters in the third worlds that spills out into lives of people of the First world in form of terrorism, flows of refugees, and continuing need for humanitarian aid.