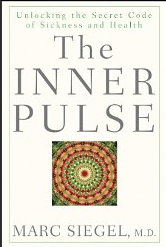 Every human being has an “Inner Pulse” which deeply connected to health and well being of this individual. This “Inner Pulse” not really susceptible to technology and scientific analysis, but clearly represents itself in unexpected medical outcomes both positive and negative. The only connection to this “Inner Pulse” could be via self-analysis and/or interaction with other humans, but it is not easily controllable.

Author defines Inner Pulse as a life force that is somehow not limited to material condition of body, but exists somewhat independently and can impact body’s survival or destruction. The Inner Pulse is responsible for unusual recoveries that seems to be medical miracles, but it also could be responsible for person succumbing to disease even if pure medical condition is not that bad.

Chapter 1: Surgeons of the Mind

In this chapter author recounts history of his own fight with depression and how he recovered by finding balance between spiritual and physical world.

Chapter 2: The Pulse of Recovery

This chapter is recount of several stories about individuals who went in coma and remained in it for a long time. Sometimes recovery occurred despite seemingly medical impossibility. This caused author to look at non-regular communications channel between patient and doctor and at all kinds of out of body experiences.

This is probably the most interesting part of the book. It reports case of multiple-personality patient who suffered from diabetes. The interesting part is that not all personalities had diabetes so when patient switched from one personality to another, level of sugar in the blood also changed. If true, it is an amazing example of direct influence of mind on complex bodily function completely out of conscientious control.

This is another story demonstrating mind’s ability to override condition of body in order to achieve some passionately required objective. In this case it was revenge. The paraplegic patient hated his former business partner who stole his money. At the end he was able temporarily override his condition, walk out of his chair and shoot his enemy. Interestingly enough he was not able to raise gun to the level to hit vital organs, so he ended up wounding his enemy in the leg before collapsing. Author sees it as sample of human ability to accumulate power of inner pulse and apply it in such a way that seems to be beyond human abilities.

This chapter is about opposite situation. Patients who seem to be in reasonably good medical condition have feeling that they are dying and it becomes self-fulfilling prophecy. From here author goes to discussion of premonitions from Titanic passengers who missed the voyage because of it and then to experiments with electric current when brain action was recorded before current was applied. The final anecdote is about famous cat in nursing home, which came to people shortly before they died, even if nobody knew that the end is near.

Chapter 6: Dancing in the Dark

In this chapter another case of seemingly unexplainable illness described, but this time with pretty clear and non-spiritual explanation. The case was result of abnormal function of thyroid gland that expressed itself through hysterical behavior of patient. The correct treatment removed the problem, but the case here used to discuss an ancient obsession with demons, spirits, and exorcisms that were applied to individuals in such condition.

This is another story about patient whose condition was highly influenced via mind, this time due to media hype about superbug. It turned out that superbugs are not really super and are well known in hospitals. It was not bug, but hype that was new. In short the patient condition dramatically worsened due to the hype for no real medical reason. It came back to normal after hype was over.

This is another story about a patient who should be dead judging by her medical condition, but nevertheless survived. This time it was author’s aunt and he believes that her survival was caused by her special psychological characteristics, especially stubbornness. He also brings in results of studies that show irrelevance of positive attitude to level of cancer survival. It seems that the only trait at least relatively relevant is will to live.

This time it is about a patient who felt that something wrong with him, got prove from medical science and survived with psychological help from deep reliance on religion.

This chapter starts with reference to Tomas Mann’s novel “Black Swan” about menopausal women who mistakenly perceived cancer related bleeding for rejuvenation. It follows with real live story about patient who was stressed and become ill as result. Eventually she was treated successfully, but not after very difficult diagnostic process. Author references book by David C. Clarke “They can’t Find Anything” dedicated to the problem of stress inflicted symptoms and expanded diagnostic tools necessary to identify such illness.

Chapter 11: The Truth about Psychic Healing

This chapter is about psychic healing and more specifically about psychic named Desmond Darrel who contacted author and informed him that he did “reading” of author from picture on web site and found low level of functionality of author’s lungs. It was true because author at the time was recovering from respiratory virus. Such occurrences of information received from psychic coinciding with actual health condition of author made him to believe in psychics’ ability to read “inner pulse” and had at least some influence on its functioning.

This chapter is about a few individuals who verifiably achieved impossible feats with their bodies. Specifically it is about Houdini and David Blain. Author believes that these achievements are result of unusual ability to control mind-body connection by these individuals.

This is about another outstanding patient Todd Barnes, a poet, and his non-traditional cancer healer Emanuel Revici. Revici started as a regular medical doctor but then in his 60-70s turned into healer creating cocktails of unknown ingredients to treat cancer. Despite failure of the healer as demonstrated by analysis of outcome for terminal cancer patients who were treated by him, in this particular case the healer was successful and Todd lived much longer than people in this condition normally do. Author attributes it to healer’s ability to establish a special relationship with patient that dramatically improved situation. This result leads to discussion of a few books and experiments related to treatments directed at mind-body connection. As usual the formal experiment and statistics of such treatments does not show their effectiveness.

This is about alternative medicine. It references a book by R. Barker Bausel “The Snake Oil Science” which demonstrates that mechanisms of convincing in effectiveness of such treatment. As usual formal scientific analysis of outcomes fails to confirm such effectiveness.

Chapter 15: Miracles and the Inner Pulse

Another story about patient and bunch of coincidences that, in author opinion, represent small miracles sometimes related to religion. However author states that he believe that these miracles do not contradict laws of nature, but just represent our deficient understanding of “inner pulse”. At the end he provide example of famous rabbi Schneerson – the producer of many medical miracles, at least according to his worshippers, who was not able to handle his own stroke any better then regular person. The final conclusion: “Strengthening his failing inner pulse was beyond even great rabbi’s ability”.

Afterword: All in Good Time

This is quite a bit more of personal family history with references to “inner pulse” as related to medical conditions.

It is an interesting collection of medical cases demonstrating connection between mind and body. My philosophical attitude to this is simple: I do not see any separation between mind and body with mind being a specific condition of brain’s neural networks at a given moment of time. Being highly complex and time dependent this condition quite possibly could not be fully known externally any more then position and moment of particle in Uncertainty Principle of Quantum Mechanics. However even granted this impossibility, the level of knowledge in mind/body connection will certainly increase and dramatically so with advance of technology. I believe it is quite possible that future medicine would include much more treatments of body via external influencing on mind that it is conceivable now.