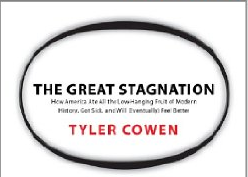 American society developed using low hanging fruits of industrial development and human capital which is not there any more, so it went into pretty deep crisis now being not able to meet usual requirements of population. The crisis was also aggravated by mistaken believe that society had more resources that it actually had, leading to overstress of financial system with consequent deep plunge into Great Recession. The salvation could potentially come from outside due to development of consumerist society in populous countries like Chine and India, creating higher demand for goods and services and support for continuing economic expansion. Another potential help could come from more effective marketization of technological achievements and increase of prestige of science leading to development of more human capital. The downside of new technologies may be its destructive capability in hands of future dictators.

Chapter 1 – The Low-Hanging Fruit We Ate
American society is in the crisis economically, financially, and psychologically. The reason for this crisis is that system as it is, was not designed to handle complex processes because it was formed and functioned during especially good condition of Low-Hanging Fruit available to it. The Low-Hanging Fruit consist of:
1. Free Land
2. Technological Breakthroughs
3. Smart, Uneducated Kids

Chapter 2 – Our New (Not So) Productive Economy
New and not very productive American economy is built on 3 major areas outside of normal market economy: Government, Healthcare, and Education. This chapter reviews all 3 areas demonstrating quite convincingly that dramatic growth in expenditures in all 3 areas produced very little, if any, improvement.

Chapter 3 – Does the Internet Change Everything?
The point of this chapter is that new technological breakthroughs like Internet did not have dramatic positive economic impact even if it created lots of valuable services that were unimaginable before.

Chapter 5 – Why Did We Have Such a Big Financial Crisis?
This chapter provides a charming answer to a very hot question and it is: WE THOUGHT WE WERE RICHER THEN WE ARE. This simple explanation goes like this: everybody expected 3% growth and made plans and build assets based on this assumptions, but when real growth was much smaller there were no money to pay for this, so economy crushed. The impact of these incorrect assumptions in financial area was growth of leverage ratio from 1:12 to 1:30 and higher. Obviously the mortgage industry collapse is another example.

Chapter 6 – Can We Fix Things?
This chapter is a review of favorable trends that could help overcome this crisis and unfavorable trends that should be handled. The favorable:
1. Interest to science and engineering in China and India combined with hope that they will become as consumerist society as US is.
2. Internet will generate more revenues eventually
3. Pressure from American electorate to move education to school choice and would cause dramatic improvement in human capital
4. Obvious for author idea: Raise social status of scientists. The example of Norman Borlaug provided as father of green revolution that nobody knows.

The potentially unfavorable listed is future technological development that could cause trouble in hands like Hitler’s in XX century.

My Take on It:

I do not agree with the whole concept of low-hanging fruits due to the simple fact that this fruit was hanging as low as it was in XIX and XX century for all previous history of humanity without any significant progress for a very long time. Much more important is organization of society and psychology of its members. These were the factors that moved Europe and America into industrial revolution creating consumerist society in the place of sustenance and robbery societies. The one most significant fact that led to it was temporary weakness of government that is forces of robbery due to process of switching from aristocratic robbery blessed by god(s) to bureaucratic robbery blessed by “forces of history” and “common good”. I believe that neither growth of consumerism around the globe nor raise in prestige of science would help to overcome this crisis. The only realistic way to do it is to find a way to dramatically decrease the scale of bureaucratic robbery and promote expansion of free markets based on Equal and Marketable rights to natural resources that would provide everybody with something to sell and therefore eliminate support for bureaucratic welfare state.