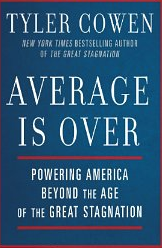 This is nicely analyzed and documented description of change in market labor requirements due to automation. This process allows automate medium complexity tasks and correspondingly eliminate middle earners with average skills who do these tasks. What left is top and bottom: the top skill and top earnings individuals whose labor cannot be automated: entrepreneurs, senior level professionals, managers, and scientist on one hand and low level low skills and low earnings jobs that are not easily automated: personal services, retail sales, and similar jobs. It would lead to significant changes in American politics, wealth distribution, and class relationships. The expected outcome is increased taxes, decrease in rents, decrease in consumption, and decrease in upward mobility due to difficulty of getting to the top.

PART I Welcome to the Hyper-Meritocracy

1. Work and Wages in iWorld
This chapter is pretty much description of the new brave iWorld where computers and related technology takes more and more tasks that used to be done by humans, leaving the young generation, even with the college level education, unemployed.

2. The Big Earners and the Big Losers
This is analysis of market scarcities and abundances that leads to high returns for individuals in possession of scarcities and correspondingly low returns to individuals in possession of abundant resources.
Scarcities are: natural resources, Intellectual property especially new ideas, and Quality labor with unique skills. Abundant are: unskilled labor and monetized wealth. Correspondingly winners are: Individuals in control of natural resources from American superrich to Russian oligarchs; innovators and individuals with unique marketable skills.
Identified areas of growth and prosperity: Marketing and Finance due to increase in value of effective resource allocation, Managers due to increase in teamwork, top level individual workers due to high dependency of results on individual actions and uniqueness of high level skills.

3. Why Are So Many People Out of Work?
The explanation provided is simple – majority of people have average skill set and demand in it is going down dramatically. An interesting analysis based on chess game that underwent invasion of chess computers. The chapter includes review of unemployment impact of great recession and phenomenon of freelancing.

PART II What Games Are Teaching Us

4. New Work Old Game
This is a small chapter about use of computer in games, specifically in chess.

5. Our Freestyle Future
This is continuation of discussion about chess, computers, and human interaction as Freestyle operation – probably future of work.

6. Why Intuition Isn’t Helping You Get a Job
This part is about human intuitive decision-making versus computer-based decision-making. It comes with an interesting set of rules:
• Human strengths and weaknesses are predictable
• Be skeptical about elegant intuitive theory
• It is harder to get outside of your head then you think
• Revel in messiness
• We can learn

7. The New Office: Regular, Stupid, and Frustrating
At first it is about new work environment saturated with computers and technology. Then author is describing movement to use this technology to grade humans with example of FICO score expanded to multiple other areas, providing foundation of multiple fears of computers going wild or at leas making errors that humans would not make.

8. Why the Turing Game Doesn’t Matter
This is discussion of human versus machine and the fact that at current level of technology when computer consistently wins over human, the Turing’s criterion is not applicable any more. However the main thrust is to demonstrate that we are moving to human/computer combination in all areas of our lives.

9. The New Geography
The new geography of work is based on technology that allows instant communication and selection of who to communicate with. It also provide for easy movements leading to people sorting themselves out into groups. As example a statistics is given of dramatic increase in variance between the most and least educated cities. Similar geographic segregation is going on around the world.

10. Relearning educations
This is about dramatic changes in education when things like Khan academy, TED lectures, and such dramatically expand availability of best teaching methods and programs to everybody in the world. There is also a new understanding of learning processes developed based on computer games. It is self-directed and self-controlled processes when instead of grades student just plays until enough skills are mastered to move to the next level. The point is also made that there is plenty of space for human face-to-face teaching, but it comes as support for computer based self-learning.

11. The End of Average Science
The disappearance of average also fully applies to science. 3 reasons are given:
• Scientific problems become more complex
• Individual knowledge and contribution become more specialized
• AI computer could do research on their own
This process in its current status reviewed based on example of author’s area of expertise – economics.

12. A New Social Contract?
The typical reasons for coming dramatic social change are listed here: fiscal problems caused by generational entitlements of developed world, growing income inequality, huge populations of India and China are joining civilized world.
An interesting note about academic life as related to entitlements: the same professor who would defend unlimited safety net, would be pretty strict in his application of meritocratic attitude and demand for work ethic to his students and assistants.

Generally author’s forecast is stated like this:
a. Taxes will raise for top earners
b. Medicaid will be cut, but not Medicare
c. Fiscal shortfall will be taken out wage earners income through hidden cuts in benefits and additional burdens and mandates
d. Real estate rent will go down because people move to cheaper housing
e. Generally consumption expenses will decrease especially for junk.

The political changes per author are not expected to bring anything really dramatic such as revolution. America is still very rich country with one of the highest qualities of life even for relatively poor people. The political division expected to go three ways: high earners leaning democratic and low earners divided into two groups. One group that is living off government transfers would support big government democrats, and another one that is living off the relatively free market would support republicans.

There is also an interesting observation about division between high earners and high prestige groups. There is tension and a little bit of fight between them about what is more important: status currency of money or status currency of intellect.

My Take on It:

Generally I agree with trend described in this book. However I do not think that average is over, it would rather change and quite dramatically. One things that got missing here is role of government not only as redistributor of wealth to the poor, but also as creator of meaningless and even harmful, but well compensated jobs for significant number or maybe even future majority of population.

The government jobs by definition have no value outside of legitimate government function of dealing with violence. These jobs produce something that nobody would buy on the free market. Actually author sees the future with government playing the decisive role in accommodation to changes described. I, on other hand, due to my half-life experience of living in USSR see another danger – it is danger that government redistribution of wealth could not prevent. This danger is boredom and loss of interest in producing something that people need and would buy and increase in interest in obtaining higher position in bureaucracy and better access to constantly diminishing pool of quality goods and services.

The only way out of this is to make sure that everybody had something to sell on the marked independently of demand for labor. I suggest equal rights for use of natural resources with individuals using less then average being able to sell these rights to individuals using more. This would eliminate dependency on labor sales or government loot for existence as long as one accepts life with somewhat below average use of natural resources.