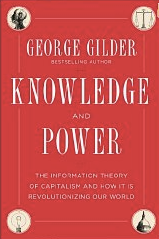 True to the name this book is about knowledge and power. More precisely it is about what kind of knowledge leads to power and how it is done. The first came a theory. The knowledge comes from information as it is defined by original Shannon’s theory of information communication, which stated that information is not just flow of data, but rather new and unpredictable piece of data. The human mind combines new information in often-unexpected way and creates knowledge to allow humans to deal with real external world much more effectively then any other animal can.

It is kind of interesting how ideas of deeply religious Gilder mirror ideas of deeply atheistic Ayn Rand. Both are at awe of real world and both are accept that it exists outside of human mind and is not limited to simple material forces. However Gilder sees in it absolute necessity of superior being, while Ayn Rand just uses notion of human consciousness as additional factor missed by both materialists and spiritualists. I guess I am philosophically with Ayn Rand, but I am afraid there is no logical justification for this except that I brought up an atheist and therefore have default assumptions formed at early age. If I were brought up in religious home, I would probably prefer Gilder’s assumptions. However I do not agree with these guys that it is important. I think that as long as science is accepted as 3 steps process a-falsifiable theory, b-practice / experience / experiment, c- theory rejection / revaluation / expansion; everything is fine and philosophical ideas are not really relevant. The problem happens when actions are based on philosophy rather then science, especially when these are violent actions. Then we have lives destroyed and price to be paid for deviation from science.

The second part of the book is going through financial crisis with correct in my opinion evaluation that it was caused by government intervention. With usual conservative idea that there are superheroes – entrepreneurs who made life better and create wealth for all other bums who would not be able to survive without these superheroes. Obviously it is also relates quite closely to Ayn Rand’s ideas. I for one only partially agreed with these ideas because with all due respect these superheroes normally did not do it alone. Society and yes, government just have to assure such arrangements that “superheroes become recipients of wealth created by efforts of multiple individuals many of which are not less hard working, often a lot smarter, and generated produce more ideas. So I think we should find better arrangement so everybody could apply maximum of his or her abilities and obtain benefits of results. Meanwhile until we found such arrangement, existing capitalism with wealth sticking in hands of entrepreneurs beats the heck out well-known alternative of transferring wealth into hands of bureaucrats and politicians.

The final chapter unsurprisingly dedicated to the future which is going to be bright because entrepreneurs eventually win due to simple fact that only entrepreneurial capitalism proved to be able creating constant improvements in human lives and any repression of capitalism would lead to decrease in wealth and consequently quality of life. I could not agree more.