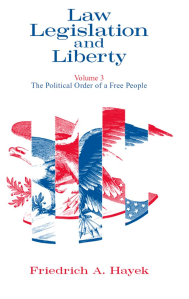 In volume three Hayek is going into discussion of Democracy as the lousy, but the best and the only effective method of peaceful change of society. At the time of writing in late 1970s he was concerned with growing disillusionment about democracy as a desirable method of government and anticipated movement to an impasse. Therefore 3d volume is basically a proposal of basic alteration of the structure of democratic government.

12 Majority Opinion and Contemporary Democracy
The biggest threat to contemporary democracy comes from government intervention into economy and wealth redistribution. When government starts to decide who gets what, when and how, it inevitably drives society apart. Hayek identifies unlimited power of democratic state as the fatal defect of democracy. He believes that the only remedy is limitation on government coercion. It should be limited to “purpose of ensuring obedience to rules of just conduct approved by most”. Involvement of democratic government into wealth redistribution and business regulation is inevitably leads to multiple special interests corrupting politicians by selling support and participation in coalition in exchange for share of loot either in form of subsidies, or tax relieve, or regulation of competition. The bottom line – only limited government can be a decent government.

13 The Division of Democratic Powers
Significant problem for democracy is created when over the time legislature losses its function as law giving body and becomes a dictatorial body which uses its power pretty much as kings used to do to direct use of resources and redistribution of wealth. The same relate to executive power, which over time tends to loose its limitations and become more of the legislature. I guess in USA this process moved quit a bit ahead with executive branch usurping more and more legislative power via regulation, which have power of laws. This intermixing of power leads to deterioration of democratic system creating lots of small tyrants at agency level of executive power and big party lines tyrant of legislative majority.

14 The Public Sector and Private Sector
This probably one of the biggest disagreement I have with Hayek. In his opinion government has legitimate functions in multiple areas not related to defense and security where it can provide services and collective goods using violence to collect taxes. I believe that role of government should be limited to the area of violence with all areas covered by private sector with government only providing decision supporting information which could not be obtained without violent power of government.

15 Government Policy and Market
Here Hayek contradicts doctrine of perfect market, which was so popular in the 1990s and I am completely agree with him. Markets are not perfect. Market consists of real human individuals and nobody is perfect. People, make mistakes, deceive, and are being deceived, fail to deliver on promise and do a zillion ineffective and inefficient things. Nevertheless market is the only mechanism discovered so far that creates opportunities and stimulus for innovation and constant improvement in quality of life. It is interesting that Hayek looks at competition as a procedure of discovery. Discovery of real human needs and prices that individuals are willing to pay to satisfy these needs. Hayek also discusses here a problem of monopolies in quite a details and seems comes to conclusion that anti-monopoly legislation is a bigger problem them monopolies.

16 The Miscarriage of the Democratic Ideal: A Recapitulation
Democracy as it developed now in western world denies ideal of equality before the law and rule in interests of majority. It developed into bargaining democracy were power of the state used to benefit special interests that bargain between themselves to achieve majority however fleeting coalition this majority represent. This necessary creates situation of lawlessness because law is stable rule, which does not change with every election, while rule by direction of current coalition in power needs flexibility to meet interest of its members and therefore had to override law. The only reprieve we have comes from separation of power and even this only when different branches of power are taken over by different coalitions of special interests which compete with each other and in process prevent complete lawlessness.

17 A Model Constitution
At this point Hayek presents some ideas to remedy the problem of democracy deterioration:
• Slightly different model of separation of power when upper house of representative body provides more law making activity, while lower house takes over some executive functions. The idea here is to reinforce rule of law by separating it more strictly from rule by directions.
• The basic clause of model constitution is that in normal times men could be restrained from doing what they wished, or coerced to do something they do not wish only in accordance with the recognized rule of just conduct. I think it is far from enough because whoever defines what are such rules has practically unlimited power. I think that the rule for coercion of not allowing doing something should be acceptable only for prevention of coercion or violence against other people. Coercion to make individual to do something he does not want should not be used at all except for removing individual off the way if he/she prevents other people of doing something.
• Hayek suggests two representative bodies with distinctive functions one more of law giving body and another more of executive day by day conduct of government business. He goes into somewhat interesting discussion how to use age of representatives, process of election, terms, and other details of how to get right people in right places of power. I, on other hand do not think that it is possible at all to have good and benevolent people elected into position of power. The power hungry crooks are just inevitable in these places. The only way to avoid it is just not have such high power positions in the first place.

18 The Containment of Power and the Dethronement of Politics
The final chapter is about limited and unlimited power and how to contain it. Hayek believes that the only way to prevent democratic representatives from serving special interests is to deprive them from giving discriminatory benefits to groups and individuals. He understands that it is not really possible, but still believes that it could be achieved by giving supreme authority to tradition or as he puts it to long-term running rules. I do not believe that it is possible because all rules and all traditions are subject to interpretation by current generation of people. It is also impossible because in last few centuries due to tremendous development of science, tradition lost its aura of the best known way because science proves every day that what thought to be correct yesterday turn out to be an error today. It constantly comes out with examples of logic and experiment beating up old notions and ideas. I think the only way to prevent democratic government from using power of coercion to serve special interests is to minimize power of coercion, period.
Actually at practical level Hayek comes to the same conclusion because after spending lots of time on designing democratic system, which would not serve special interests he talks at the end about Peace, Freedom, and Justice as “the three great negatives” meaning that they could be achieved only by negating ability of government to interfere.

EPILOGUE: The Three Sources of Human Values
It is extremely interesting discussion about evolution, sociobiology, formation and maintenance of tradition, and unstoppable march of progress. Hayek seems to believe that civilization and tradition are going against human primordial instincts. He talks about deterioration of Western world and its democracy as consequence of re-emergence of suppressed primordial instincts. He even states: “And since we owe the order of our society to a tradition of rules which we only imperfectly understand, all progress must be based on tradition. We must build on tradition and only tinker with its product. “. I actually believe quite opposite. As bad as democracy looks now, it is a lot better then it was at any point of time in the past. It is just question of what is it compared to. If it is compared to ideal, it is pretty bad. But if we compare it to the reality of the past, it is getting better every time we learn something new about the past.

I mainly agree with Hayek’s final conclusion: “Man is not and never will be the master of his fate: his very reason always progresses by leading him into unknown and unforeseen where he learns new things”. However I would add a significant adjustment to it: “The more man learns, the better he is capable to adjust environment to himself and himself to environment even if it is constantly changes, and, as result, he is able to make his fate a lot better then it would be otherwise.”