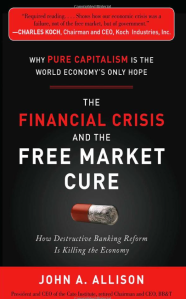 John Allison is the former CEO of BB&T – the 10th largest financial services holding company so unlike vast majority of analysts writing books about financial crisis he really knows what he is talking about and has success of his company as unimpeachable prove of it. BB&T went through financial crises without one single quarterly loss despite its core business being real estate related. So here is what he had to say:

1. Government policy is the primary cause of the financial crisis because American system is not free market system, but rather mixed economy with government dominance in financial industry.
I am fully agreed with this statement, but I would also add that American economy had never been fully free market system. However up to the beginning of XX century it was relatively close to the free market mainly because of availability of new land and weakness of government that lacked standing army and was divided into multiple entities (states) making it difficult to properly organize mass robbery of population by bureaucrats and politicians (BUPs). During XX century American BUPs managed to obtain permanent Army, consolidate power at the federal level and bring economic development to near standstill.

2. Government policy created a bubble in residential real estate
I do not believe I met anybody disagreeing with this statement, so it could be considered trivial, unless vast majority of people were ignoring logical conclusions from this fact – need to remove government from economy in order to prevent similar bubbles

3. Top Wall street financial institutions contributed to crises by using Government provided incentives to generate profit without regards to negative consequences and were proved to be correct in their reckless disregard to economic consequences by government bailouts
This fact as the previous is generally accepted, but then fully ignored by mainstream

5. The deeper causes of America’s economic problems are philosophical, not economic
I would only added that philosophy is not a stand-alone product of human intellect. It is developed by individuals based on their perception of reality and directed at providing survival and promotion of values of these individuals. Current philosophical crisis is result of failure of socialist ideas, which in the absence of viable alternative for significant part of population just mutated from erroneously thought as productive form of government property over means of production into ideas of government controlled distribution and rules of game imposed on production. I think that this mutated socialist idea is as flowed as idea of government control over means of production and will be as destructive as original one.

6. If direction is not changed soon, the United States will be in serious financial trouble in 20 to 25 year
I think that it will come quite a bit earlier. My guess is 10 – 15 years.

Allison’s solution is:
Let markets correct errors by allowing big financial companies fail and recessions run their course and bring supply and demand in sync by eliminating ineffective businesses. Avoid Keynesian solution since demand does not create supply, but rather supply creates demand

I think that all discussion about supply side versus demand side (Keynesian) economy is misguided and most resembles discussion of what comes first – chicken or egg. It is all about incentives that people have or do not have to be productive. I fully support free market because it provides such incentives giving capable people only one option for prosperity – do something that other people need, while demand economy of Keynes does not. Keynesian demand side economy creates incentive for capable people to get as close to control of wealth allocation as possible and allocate it to themselves. This leaves productive work to people who failed to get close to government redistribution levers. The result is completely logical – the more capable people move away from producing goods and services where they get robbed of fruits of their labor into the ranks of BUPs to do redistribution where they get rewarded with the fruits of other people’s labor, the less goods and services are available overall. Large-scale experiment to test this notion was conducted in former Soviet Union, which successfully proved this logical inference leaving Soviet Union in dustbin of history.

In the last few chapters John Allison provides quite a few well thought through solutions in area of government economic and financial policies. Unfortunately they all are unrealistic because they do not provide direction how to change attitude of bureaucrats and politicians (BUPs), low marketability people and all other people who are grew to be dependent on government so they would support market oriented reforms. Without such change of attitude reforms are impossible.